Last Time...
Dra'mour and Orbuhl managed to get some help from an unknown patron in keeping the merchants safe, but only just started to put the crisis together. Check that out Here if you haven't read it yet

Weekly Actions
1. Dra’mour heads back to the surgeon, pays 5V and rolls a 3. Close, but not quite. The surgeon says it’ll take a while longer, but the ankle is healing nicely. Next time I roll I can subtract 2 from the roll, so hopefully the injury will be healed soon.

2. Next Dra’mour and Orbuhl head to the market. The spider eggs Orbuhl retrieved are sold for a total of 30V. 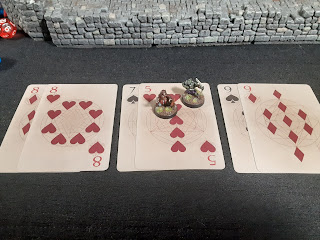 Dra’mour decides to investigate rumors of a missing person, Milo Goodbarrel, a feyfolk potter who is being held by the Necromancers of Huern in relation to the current caravan raids. Chorus Questions:

“Was Milo on a caravan into the city when he went missing? 2, No, but he had just recently arrived in Stormrest.”

“Are any of Milo’s goods missing? 3, Yes, but only raw materials that he had recently purchased to make new urns.”

“Is it likely they kidnapped him to make vessels for their necromantic rituals? 2, No, but that isn’t outside of his skill set.”

“Does Milo know a lot about the movements of the caravans through the area? 3, Yes, but that doesn’t seem to be their primary goal in taking him either.”

“Has there been a reward posted for his safe return? 5, Yes, and it’s from the same guild of merchants that Dra’mour has been working with already.”

“Was Milo taken within the city walls? 3, Yes, but the guards are working to cover up that information.”

At this point it seems likely that Milo got grabbed when the Necromancers came looking for materials, and he was taken as a sacrifice or otherwise… If they discover his true worth, it could make the situation worse for Stormrest as he can make the kinds of vessels they need for the rituals, as well as supplying them with information about other merchants. Milo might end up exchanging that kind of information for his life, which would make everything worse, so Dra’mour decides to help.

With the 37 Valuables Dra’mour has he could potentially hire a mercenary for this adventure, but decides against it. He may end up regretting not having the extra help, but it’d be nice to be able to visit the curiosities market next week to look for some more exotic items. 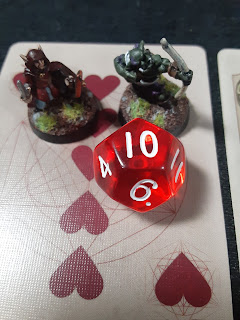 Orbuhl moves forward into the darkness of the crypt, but Dra’mour senses a terrible danger and holds out their hand, reflexively spending a point of Myth. Orbuhl looks down and spots a very thin wire stretching across the entrance, and follows it to a hole in the wall where several spring loaded blades wait pierce anyone that would trigger the trap. Orbuhl makes short work disarming the device, and manages to salvage several usable weapons from the mechanism. (Orbuhl failed their perception challenge to spot the trap by 1, so Dra’mour spent Myth to make sure they weren’t both skewered. Disabling the trap resolves the encounter, and allows for D4 random weapons to be salvaged)

Post Encounter
Dra’mour recovered the point of Myth he spent, but no valuables or narrative are uncovered

Encounter 2: Event: Locked Passage
Dra’mour heads down a set of stairs, but stops half way down. Concealed in the wall is a door disguised as a fresco painting. When the catch is tried it is tightly locked. Neither Dra’mour nor Orbuhl have the thieves tools required to pick the lock (I knew I should have bought some before leaving!!!), but he does have a vial of shatterlock. Dra’mour applies the gooey substance to the mechanism, and waits a moment for it to harden before striking it once, opening the door as the mechanism gives way.

Dra’mour, senses the possibilities of what lies beyond and spends a point of Myth, seeing that there is a secret passage around the next area which leads deeper into the crypts. (I rolled for a chest to be discovered, but since I didn't get thieve's tools Dra'mour would have to break it open. Using the power of Myth there was a secret passage instead.) I reveal the next encounter, seeing it’s another event, so decide to pass around it, heading to the 4th encounter instead

Post Encounter
Dra’mour recovers the spent Myth, and gains 3 reputation. Narrative, Crisis: Dra’mour and Orbuhl stop, hearing the sound of a voice from a nearby grate. “I’ll tell you everything, just please spare me!” (Chorus Questions: Do we hear Milo being questioned? 5, Yes, and he is completely spilling his guts, telling them everything he knows about the merchants and their routes” This is information that the Necromancers could very well use to increase their attacks and avoid the guards that have been put in place! Dra’mour and Orbuhl decide they’d better hurry up and rescue him before he tells them anything else. 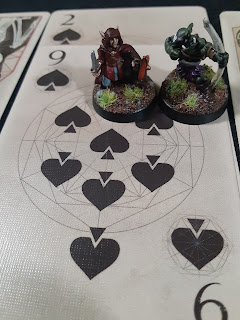 Dra’mour and Orbuhl enter into a small chamber where crates and barrels of looted goods are stacked. They hear the soft pad of chitinous legs on the floor, and know they’re about to encounter a giant spider, not unlike those that Orbuhl stole the eggs from last adventure. 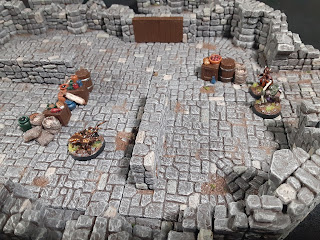 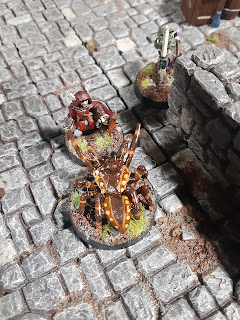 Orbuhl rounds the corner, letting loose an arrow, but the huge flesh stripper spider lunges forward. Dra’mour isn’t far behind them, but only has enough movement to make it into contact with the looming arachnid. 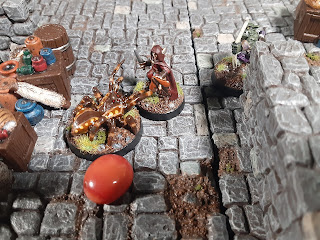 The spider lashes out with it’s razor sharp legs but Dra’mour gets a critical success, wounding it soundly. The spider, considering it’s options, pivots so it can push Dra’mour into Orbuhl if it gets the chance.. 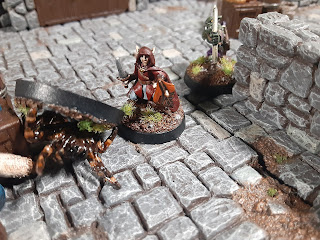 With the spider wounded Dra’mour makes short work of it in melee, overwhelming it so completely that it had no chance to make it’s Resilience(Rn+) roll.

Post Encounter
Fame and fortune finds 3R and an Ocean Eye (Provides a Bonus(1) to perception for an encounter) For narrative Dra’mour finds something out about the location they’re currently in. Chorus Questions: “Is this crypt a staging area the necromancers are using before they send looted goods to their main base? 4, No, and it looks like they’ve never used it before this raid.” “Is that because it’s well cared for by the city? 3 Yes, but with the raids, the necromancers are becoming bolder and bolder in taking territory as well.” Not great, but not unexpected. Dra’mour wonders aloud if the necromancers don’t have an ally in the city council, or if the guard that is looking the other way…

The locked door is tempting, but Dra’mour leaves it be, once again needing to smash a lock to open it. I pull a card for the goal and discover that we’ll find Milo Goodbarrel in the next area. 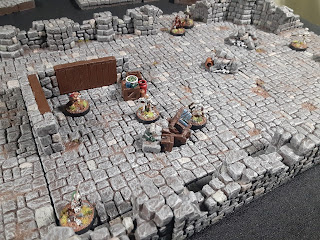 Dra’mour and Orbuhl can hear screaming coming from ahead and they quicken their pace in time to see a Feyfolk who matches the description of Milo Goodbarrel backing into a corner as several skeletons approach him, weapons drawn. Dra’mour quickly pieces together that Milo must have cut his ropes and made a run for it, judging by the rusty butter knife grasped in Milo’s hands. Before he can act though, the skeletons turn toward him and Orbuhl! 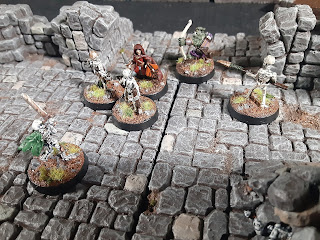 The skeletons temporarily forget about Milo, simple though they may be, and judge Dra’mour and Orbuhl as the greater threat for the moment. One of them thrusts their spear at Orbuhl, but they just barely manage to avoid getting skewered by its rusted tip. 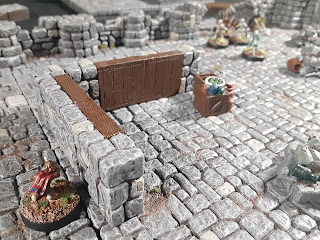 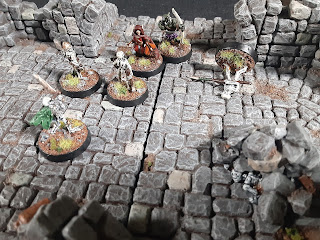 Dra’mour engages the skeleton wielding both a one handed and light weapon, thinking it will be easy prey. Unfortunately the animated bones manage to react as quickly as he does, and they both end up stepping backwards, breaking apart. Dra’mour stumbes into Orbuhl and they both end up staggered, but are able to compose themselves before Orbuhl lets loose and arrow and takes down the spear wielding skeleton. 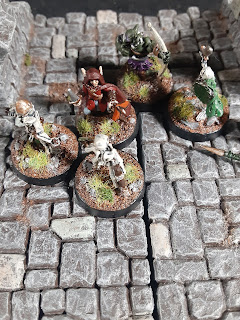 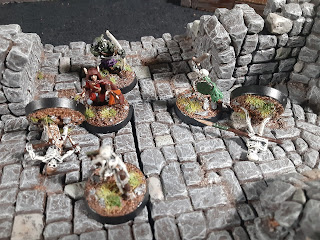 Dra’mour manages to destroy the first skeleton and push the second one backwards as his blade knocks off it’s shield. Orbuhl fares less well, but Dra’mour uses his Myth to ensure a deadlock rather than see Orbuhl lose the melee. 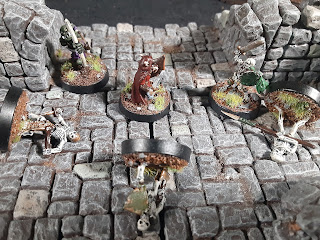 Dra’mour ends up in a deadlock with one of the skeletons, after using yet more Myth. Orbuhl takes the opportunity and knocks the skull off of it with a well placed shot. 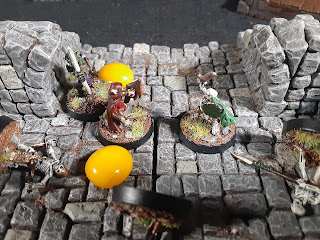 The final skeleton moves it’s blade is a crooked fashion, catching Dra’mour off-guard and nearly landing a terrible blow, but with the power of Myth and his large shield Dra’mour is instead knocked backwards, staggering him and Orbuhl again! (skeleton rolled a 1, Dra'mour used a Myth point to avoid taking the automatic trauma by changing the skeleton's roll to a 3) 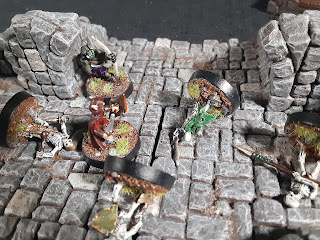 Post Encounter
Restore Myth: No
Fame and Fortune: 6 Valuables, 7 Reputation
Narrative: Adversaries. Chorus Questions: “Does Milo tell us something about the motives of the Necromancers? 2, No, but he does confirm that they’re planning on increasing their raids.” “Does he know what caravan they’re targeting next? 6, No.” “Do we find evidence that the raiders are a sub-faction of some kind? 5, Yes, and it seems pretty clear that the rest of the faction isn’t happy about it, especially given the hit that was put out on Shaldri Breathtaker (Campaign log 3)

Milo runs toward his saviours, a smile on his face and tears in his eyes. After calming him down and asking some questions about what the necromancers were talking about while they were questioning him, Dra’mour learns that the necromancers that are orchestrating the raids aren't well liked amongst their own faction, due to the attention and trouble that the raids are causing them. This makes a lot of sense, as the Necromancers of Huern have historically been a reclusive group, using the labyrinthine crypts to perform their dark experiments, and doing their best to keep attention off of themselves.

At this point there is still another area to explore, as well as the potential of breaking down the locked door, but Dra’mour’s Myth is already halfway depleted, and the chance of Milo getting wounded in any fighting is high. It’s decided discretion should carry the day, and Dra’mour and Orbuhl, along with the rescued Milo head out for the relative safety of the city. 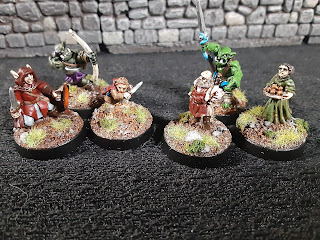 Narrative: Returning to Stormrest Dra’mour and Orbuhl are greeted warmly by a few members of the merchants guild, who regard Milo as part of their family. Dra’mour collects the small reward and puts it towards slightly better accommodation for himself and Orbuhl. With the remainder he does what he can to help those merchant’s families who lost their loved ones to the necromancer’s raids. While the guild helps organize routes, there is no bonding or insurance that the guild provides in the case of loss or death, so there are many families suffering both emotionally and financially from the death of their loved ones. Dra’mour tries to help where he can, but it simply isn’t enough, and many of the families view him with suspicion, with him being an outsider from Stormrest. (Much of the above was generated by asking Chorus questions, like “Is the leftover reward money enough to help some families get by?” and rolling No, And)

Phew, what a game! Not documenting every dice roll helped speed this up a lot, and I’m really enjoying where Dra’mour’s story is going. I want to know what this off-shoot faction is planning to do with the goods they’re looting as well as if someone within Stormrest is helping them, but all that will have to wait until next time! Going forward I may stop recording the exact Chorus questions, and rather provide just what they end up meaning for the narrative. Thank you for reading, and I hope to continue this campaign soon! 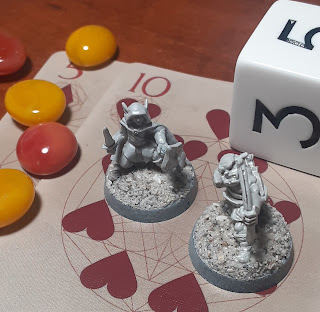 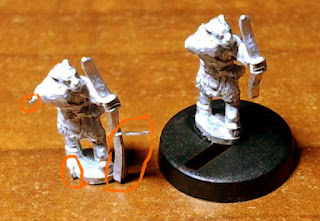 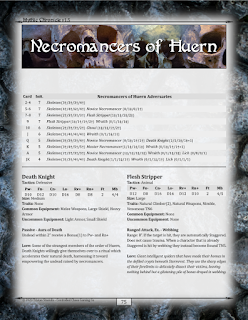 Mythic Chronicle: Behind the Scenes...